How George saved $42.000 while getting a beautiful girlfriend.

In this case study, we take a look at George; an international client who traveled a lot, yet was able to meet his current girlfriend with our assistance.

George wasn’t somebody who always had a lot of women on his arms in the past. He described his last girlfriend to be around a 6 if he had to rate her.

His extensive focus on business made him successful. That freedom helped him extend his attention to other areas of his life. However, he never improved his confidence at the time of getting women.

George was looking to meet interesting and attractive women. Before joining Hovalo, George had little success with dating in real life and with online dating. This led us to know we had to create a great campaign for him.

In the past, he was getting about one date every two to eight weeks. The quality of the dates wasn’t exactly what he was looking for, which caused him to be frustrated with the dating process.

For George, we knew we had to get things in order to get a better results than before. We started by editing his current pictures. Our award-winning editor has worked on photos from Victoria's Secret and Asia’s Next Top Model. This helped a lot with getting the most out of George’s current pictures.

We also helped George take new photos, so we could add more pictures to his profile. This also lead to us being able to remove the ones that were less attractive. We gave instructions to the photographer he hired so the pictures were optimized for online dating.

For our picture editing, we use an internal rating system as well as Photofeeler.

Below you can see the difference in rating we got from editing one picture. As you can see, we got the same picture from a 6.8 to an 8.9 for attractiveness score! 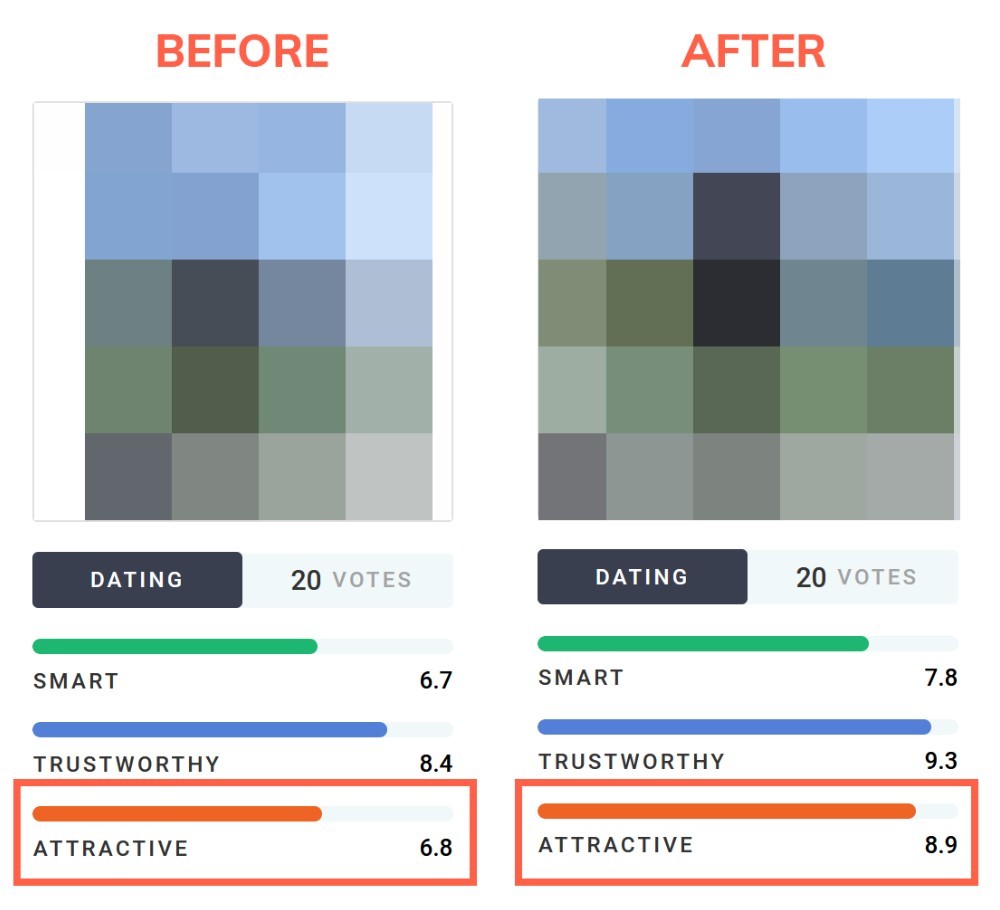 This resulted in George getting 6 to 8 dates per month which was an improvement of more than 300%.

In terms of dates, George had 14 dates with attractive women. George was looking to meet amazing women and potentially find somebody to settle down with. It only took 2 months before he actually found a girl he wanted to date for longer.

The time that we saved George after making calculations resulted in 12+ hours per month that he didn’t have to spend on frustrating dating apps and rather gave him invaluable extra time with his girlfriend.

Based on an estimation of George’s hourly rate, we’ve saved him $42.000 as well.

Currently, George is still in an amazing relationship with the woman that we found for him.

Result: George got an amazing girlfriend in only 2 months while saving $42,000.

How did you find Hovalo and what made you want to use our service?

“I heard about your service through a friend who recommended me to try it. I have to say I was pleasantly surprised with the results and extremely happy that I found my girlfriend thanks to your work.”

We sign an NDA with all our clients to keep their secrecy. For this reason, all the personal data is redacted or removed and there is no  possible connection between the case study and the client. For the same reason, we also changed his name to avoid any potential recognition.

Want to be our next success story?

Schedule a free call to find out if you are eligible!

Discover how we can help you get your dream dating life while saving you thousands.

At Hovalo, our mission is to help entrepreneurs and hard-working professionals have a great dating life by taking over the task of finding suitable dating partners for them.

- About Us
- FAQ
Email: [email protected]